Federal Prosecutors and California authorities are looking into filing charges, but they hesitate. Under existing laws, Farook’s live-in mother may not be convicted for aiding and abetting.  The law does not create a duty to inform authorities of the bombs and the preparations, which is where a change in anti-terrorist laws or a judicial interpretation can make such prosecutions viable. 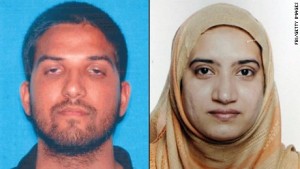 Teachers, nurses, doctors, and psychologists are required by law to report child abuse, sexual abuse and domestic violence.  It is disingenuous to argue spouses should be insulated from arrest for aiding and abetting persons preparing mass murders.  The sanctity marriage does not mean it is okay to skirt anti-terrorist laws.

There is no legitimate policy consideration to make immune from prosecution those who assist, by act or silence, plans for mass killings.   Spouses, neighbors, roommates, fellow church-goers, or religious leaders should not be allowed to hide behind  “protected communications” or “fear of profiling.”  Congress must review federal anti-terrorist statutes.

Future mass killings could be stopped if people with actual knowledge were prosecuted for failing to alert the police.

With the stroke of a legislative pen or a judicial interpretation in the Farook and Malik mass murders, the live-in mother can be prosecuted.  If she is prosecuted, many others will come forward and inform authorities of predicates and preparations for future mass killings.  This would be a very real and effective way to stop copy-cat killings and stop those who are enlisted or motivated to mass murders.  It doesn’t matter if the person is a sociopath, a psychopath, a religious zealot, or a white supremacist.

Here is how to change the law: Amend the federal anti-terrorists laws.   Anyone with actual knowledge, or constructive knowledge, (would have known or should have known but through willful blindness chose not to acknowledge or be aware of a fact) either in the wings or in the home, would then be prosecuted for aiding and abetting violators of federal anti-terrorist laws.

In the case of Syed Farook and Tasheen Malik, the live-in mother arguably was aware of the arsenal and the bomb making in the garage.   Criminal laws must be changed so as to compel people to come forward or be incarcerated for assisting terrorists, either by cooperation, assistance, or by willful blindness.

If you agree that the laws should be changed then write, or forward or send this blog entry to your Senators, Members of Congress, State Senators and State Assembly member(s).