The public conversation on the use of armed drones is in the news.  On one side it is argued that Due Process rights confer upon judicial process the sole venue for “civilized” adjudication before the imposition of the death penalty.  Remember that great movie line from Silverado (1985) when the Sheriff said: “We’re gonna give you a fair trial followed by a first class hangin.”   On the other side is the argument that the right of a “self-defense” killing of terrorists (either in leadership roles or carrying out the directives of homicide upon non-combatant civilians) is justified.  But now, it is argued, that for the same reason you can kill a pirate at sea, nations can kill terrorist targets on land.  Here’s how the argument is posited:

The  “right of innocent passage” by seafarers pre-dates Chinese trading junks of the third century B.C. and Greek trading vessels plying the waters of the Mediterranean.   Codified in the United Nations Convention on the Laws of the Sea are historical, and still valid, rules of conduct at sea as to the right of unfettered passage. The Geneva Convention on the conduct of armed conflict and modern judicial process conflate with those ancient laws of the sea; those who impede safe passage of seafarers can be summarily executed. 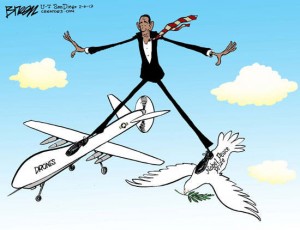 What is not disputed in the released legal memorandum or in other government policy documents, as of yet, is the ancient rule permitting the killing of pirates for acts of piracy at sea. The rule, simply stated, is that a pirate attempting to board a vessel can be summarily killed. By analogy, a person who is in the process of attempting or committing an “act of mayhem” can be justifiably summarily killed, as any pirate attempting or boarding a vessel at sea.   In a contemporary legal analogy, Florida’s Stand Your Ground statute can justify an act in self-defense resulting in the taking of human life. The New York Times, in an editorial opposing any non-judicial rational for terrorist killings, approaches the issue from a due process judicial process aspect.  How different is the case for summarily killing Somali pirates from the use of drones to kill targets of opportunity in this our war on terrorism?  History and politics will ultimately make judgments upon the killings of our times by the use of armed drones.  Where do you stand?