Alejandro Mayuorkas, the deputy secretary of the United States Department of Homeland Security has publicly stated that the issue will be discussed with Cuban authorities in the context of negotiations to normalize relations between the United States and Cuba. Of the approximately 34,500 Cubans who have been convicted of crimes which subject them to deportation, the overwhelming majority have not filed legal papers to stop their removal; assuming that their special status will not be modified. 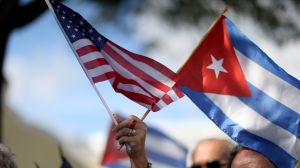 Immigration lawyers throughout the United States, and particularly in Miami, where the largest number of Cubans subject to deportation reside, have been swamped with calls for help. Because those who have been issued deportation orders in past years have not elected to fight those removal orders in Federal Court they may have lost the right to object to their removal. As a result of their confused legal status: ordered to be removed but not removable due to U.S. policy, those individuals ordered to be removed may face removal in the coming year or two.

The United States Supreme Court, in rulings in 2001 and 2005, prohibited the detention of those immigrants who cannot be deported to Cuba pursuant to the policies of the U.S. Federal authorities. The rulings required that they be released into the community after serving their prison terms in the United States and were, and are, required to report in person or by mail to Immigration and Customs Enforcement agents (ICE). Knowing and monitoring their locations permits the ICE agents to find those individuals and begin removal if and when Cuban and United States negotiators resolve the question of removal.

As of the date of publication of this report (February 2015), ICE has not changed the policy as to the removal of Cubans residing in the United States who have been ordered to be deported. With the exception of 2,746 Cubans who were accepted by Cuba in 1984, there have been no Cubans removed to or accepted by Cuba. Of those 2,746 Cubans on the list, almost all of them arrived in the United States in 1980 on the legendary Mariel boatlift operation. The Mariel Boatlift of 1980 is reported to have brought 125,000 Cuban nationals in private boats to Miami, Florida. Many nations, other than Cuba, make it difficult or impossible to remove their citizens who are in the United States and commit deportable offenses. Among those nations listed by U.S. officials as “recalcitrant nations” are Iran, Vietnam, Cambodia, India, China and several other Caribbean nations.

The Sun Sentinel, a popular newspaper in Broward County and Miami (Florida) recently inflamed passions on this issue by publishing a series of reports about Cubans who have been convicted of Medicare fraud, rape, armed robbery, narcotics violations and violent crimes and who remain in the U.S. and flaunt their special status as non-removable aliens. This has brought about an increase in the tensions between Cubans who have the right to remain in the United States and citizens of other nations who are routinely and regularly deported from the United States to their country of origin.