The Obama administration  has announced that it is expanding the Center for Strategic Counterterrorism Communications efforts to “countermessage” terrorists groups. Propaganda has a long history of use as a governmental tool to enlist public support and oppose groups that disagree with State policies. 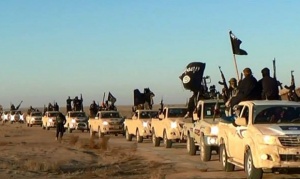 In an article in the New York Times (dated February 16, 2015), it was reported that the Executive Branch is expanding  funding for ‘countermessaging’ recruitment by groups the government considers terrorist enterprises. At the center of the funding is a governmental agency The Center for Strategic Counterterrorism Communication, currently run by Alberto Fernandez, a career foreign service officer and Middle East expert. Mr. Fernandez has announced his retirement and will be replaced by Rashad Hussain, a Muslim-American with reported close ties to the Obama Administration. Funding, currently at five million dollars annually, soon will be increased significantly.   Reportedly the current 350 Twitter accounts used to moderate and infiltrate the “terrorist community” will be expanded. The new plan, it has been announced, will use “digital outreach teams” in an “Information Coordination Cell” to mitigate extremist violence.

The Administration  has stated that “We’re getting beaten on volume” and that to compete with the enlistment efforts of terrorist groups the government will expand exponentially governmental presence in Internet media. The government’s decision to increase funding and expand the use of internet channels and media to influence the enlistment efforts of Muslim extremists is reportedly tied to and a response to, the shootings in France and most recently in Copenhagen.

Administration officials said a recent conference on effective use of social media to blunt extremists as the prompt to the expanded use by the Obama Administration. What has not been reported  is a legal basis for the federal government to use social media as an arm of the executive branch’s powers to act in matters of foreign policy. The issue is not whether it is an effective method to counter the use of social media by extremists groups. The issue is the use of social media by the government to advance policy goals. Policy goals are just that, policy goals and not governmental powers.   As important as it may be in the public arena for the government to effectively respond to domestic and international acts of terrorism against civilians, the lawful exercise of governmental actions to use propaganda as an extension of war powers must be questioned. That the constitution empowers the federal government to field armies in times of war does not empower governments to influence the process of public debate.