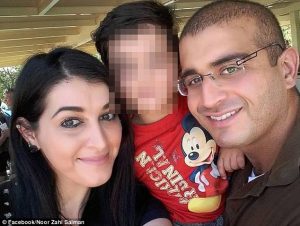 Noor Zahi Salman, (the second and current wife of the Orlando shooter, Omar Mateen),  told the FBI she knew of Mateen’s plan for a mass murder shooting, accompanied him to scout out potential targets, went with him to the Pulse Club in Orlando, and accompanied him to buy a holster and ammunition.

Is that enough to charge Mateen’s wife as aiding and abetting the murders?  Can the law support a conviction?  Is arresting her a public relations issue or a law enforcement issue? These are all questions that investigators will be looking to answer in the next few days.

Decide for yourself. But first understand the law.  Aiding and abetting means “assisting in the commission of someone else’s crime.”  According to 18 U.S. Code § 2, Salman, if convicted of aiding and abetting, could be punished as a principal.

Read the Manual of Model Criminal Jury Instructions, 5.1 Aiding and Abetting. There are four elements that must be proven beyond a reasonable doubt. In Salman’s case, to be found guilty of aiding and abetting Mateen of murder, the first thing that must be proven is that the crimes occurred, which they did.

Second, that Salman aided in at least one element of the crime. This may be provable, if it’s true that Mateen’s wife helped him scout out the scene of the crime and went with him to procure things he needed to murder all those people.

Third, that Salman acted with the intent to facilitate the crime. What does “facilitate” mean?  Mateen’s wife must have not only associated with the person who committed the crime, but she must have helped Mateen, knowing he intended to commit a crime.  You decide if Mateen’s wife acted knowing that Mateen intended to use guns to kill people and that there still was a realistic opportunity for him to withdraw from the crime.

The fourth element to be proven is whether Salman acted before the crime was completed.

As more facts become known, you can weigh what you read in the papers and see on TV.  You can mull it over and come to your own conclusion.  But, if you are a prosecutor, you don’t mull and consider if it is a politically popular thing to do. The decision to prosecute is a decision by the U.S. Attorney and the State Attorney in Orlando.  What the prosecutor looks for is sufficient evidence to survive a judgment of acquittal at the conclusion of the government’s case.  Juries decide if the evidence meets the government’s burden of proof beyond a reasonable doubt.  Can prosecutors prove the elements of aiding and abetting the charge of murder, the murder of 49 people?  That is a jury question and that’s what jury trials do: They weigh evidence.  If you believe it is a question of proof, then you should encourage the U.S. Attorney and the State Attorney (the prosecutor’s office in Orlando) to charge Mateen’s wife with aiding and abetting.   Let the proof come out in a trial.  A jury can decide if it meets the test of proof beyond a reasonable doubt.