As recently as August 6, 2014, the New York Times reported that Justice Ruth Bade Ginsberg has commented on the Supreme Court’s recent decisions, saying that while gay and lesbian rights move ahead, women’s rights have moved off the Court’s radar.  Her comments were that she sees “inconsistency.” 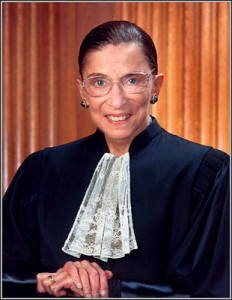 Now, no one is suggesting anything sexy about the Court, but their sexitics (sex + politics) is being analyzed, reviewed and digested and has been in the news.  As recently as June 2014, the Supreme Court has ruled that same-sex couples have the right to equal treatment in some clearly defined legal matters.  And, during the same term, the Court has created law that corporations are persons and have religious views and rights.

The fiction of corporations as persons (just as humans are persons) has been used by the Court to give corporations the right to participate in elections and, now, to challenge women’s rights.  The Court is playing this as if it were a trump card. It is assigning human rights to corporate personhood and equating those rights and powers with human personhood.   Now the Court has gone on to use this new concept of “corporate personhood” to restrict women’s rights, and Justice Ginsberg’s reaction is in the news. This modest comment is a powerful statement that the sexitics of the Court is out of balance.  Court followers agree that her stance on “sexitics” on the Court may push her to remain on the Court beyond her hoped-for retirement, and champion women’s rights.  Justice Ginsberg’s comments were made before a law school audience.  Her reported comments are that the Court writes of “equal dignity” and fundamental values in gay rights cases, but the Court is retreating on women’s’ rights issues.

From our perspective, in the courtrooms, it is foreseeable, and I’m forecasting here, that the Supreme Court may soon declare that marriage is a union between persons, and that the sex of the persons does not bear in the legal considerations and rights of marriage.  The clear trend of this Court is to push back on women’s rights.  If you review the recent decisions on medical leave, equal pay for equal work, and abortion and contraception rights in the Court’s recent decisions involving “Obama Care,” the trend appears like a rollback.  Re-read the “Hobby Lobby” case and see how the Court has created a right for corporations to have religious views on non-religious issues and trump a woman’s access to contraception.  Define religious issues as having to do with faith and spiritual matters and a woman’s right to control her body’s reproductive capacity and you can find a defining line between one’s beliefs in spiritual matters and social issues such as reproductive rights and personal choice on access to contraceptives.