Rarely imposed since the 1940’s, quarantines are both: 1) Creatures of law, subject to constitutional muster and 2) Public health policy; based on the best current state of medical science: its understanding of the process by which infection works in its biological host, and the methods of transmission of communicable disease organisms.

The issue has been in the news because Ebola, emanating from Western Africa, may be communicated by infected persons traveling to the United States. Ebola as a disease does not have the virulence and infection rates of other viruses…but the next communicable disease may. SARS came, but was tamped down, the next disease may be more difficult to control or may spread faster than current control standards can effectively restrain transmission. 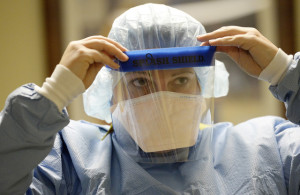 Lawrence Gostin has been doing good work in assembling the law on the question of law and quarantine. Teaching at Georgetown University, he has reviewed what Governor Christi did in New Jersey. The legal questions in any analysis are: 1) Rules of class designation; and, 2) Fairness in individual risk assessment. The law, as it stands, first addresses whether the designated members of the class, subject to quarantine,  comply with Due Process standards of reasonableness. Secondly, the law requires that those members of the class have adequate access to the courts to determine if their individual facts, their “individualized risk,” is afforded judicial review.

We are speaking to the constitutional issues of Due Process and Equal Protection under the law. The legal criticism of New Jersey’s  and Maine’s rules (as they were initially propounded), are the States’ rules were over inclusive and do not have a process for individual assessment of the actual risk of infection transmission from the persons in the class. Nurse Kaci Hickox, initially tented outside a New Jersey hospital, then went to Maine,  and subsequently permitted to live in her home, brought what may be the first of a wave of legal challenges to the quarantine programs as they are currently structured. Ms. Hickox, age 33, was a volunteer nurse working with Doctors Without Borders for five weeks in western Africa. She was detained at Newark Airport under federal quarantine, then, in effect; She came under New Jersey’s recently enacted quarantine rules before going up to Maine.

A constitutional challenge can and will be asserted to two aspects of effecting quarantine. First, the statute must meet constitutional muster: Due Process and Equal Protection. Then, the administration of the program, once structured by the enabling statute, must be effected by an agency. Agencies are created to carryout legislative  programs and are subject to the rules applying to administrative law. Ask: is the agency following the statute? Ask: is agency policy authorized? Ask: are agency rules compliant with Due Process? The landmark case of Gibbons v. Ogden is a good start for more comprehensive understandings of how judges approach quarantine challenges.

Federal laws state that jurisdiction arises from Article I, Section 10 of the U.S. Constitution under which the federal government effects collection of taxes and duties on imports by right of the constitution empowerment granted to the federal government to inspect items in commerce between the U.S. and foreign states. This has been extended to tariffs and taxes and quarantine. The push back comes from the reasoning in Printz v. New York, which limits the federal government’s power to commandeer (either by physical force or statute) local and state government officials to carry out federal law. Fasten your seat belts, its going to be a rough ride.