Last month, on February 16, 2016, the U.S. Government asked a California federal court to compel Apple to assist the FBI in the search of the San Bernardino shooter,Syed Rizwan Farook’s, iPhone.  Apple has objected to doing so, claiming it has “…done everything that is both within our power and within the law to help them.” 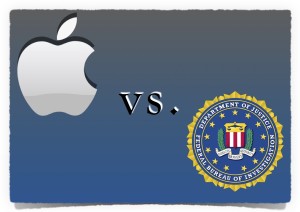 In the past, Apple has complied with government search warrants, under its prior operating system, bypassing its passcode and unlocking some of its content pursuant to the warrant. But under Apple’s new encrypted software, the data is encrypted automatically using a digital key that can only be accessed by the user and not by Apple or anybody else.  And since developing the new iOS8 operating system, Apple claims in its policy that it can no longer bypass the passcode, “…and therefore it is not “technically feasible” for Apple to respond to government search warrants.  For this reason, the government’s already obtained search warrant has not been very useful and under the All Writs Act, the government is seeking assistance from Apple because they state, “Apple has the ability to modify software” to disable the auto-erase function only on Malik’s iPhone.

U.S. Magistrate Judge Sheri Pym issued an order approving the government’s petition and in response, Apple issued a statement outlining their reasons for refusing to cooperate with the FBI, stating the FBI is asking Apple to “build a backdoor” to its products, thus setting a dangerous precedent.

Amid the tsunami of reporting and op-ed opinions on this issue, it’s important to remember a key component of the 4th Amendment is the Expectation of Privacy Rule.  This standard, established in Katz v. United States is fundamental in analyzing whether a search under the 4th Amendment is reasonable or not.

The U.S. Constitutional protections against unreasonable searches and seizures and recognizes as fundamental that there is a consensus among people of what the government cannot go beyond. For example, it is reasonable to believe that what I write in my personal diary is safe from governmental intrusion.  It is not reasonable to believe that what I say on the street in an open public place is beyond the reach of a government search and cannot be used by a prosecutor in court.

So, the question here is whether it is reasonable to believe that whatever information issue on an Apple device is beyond the reach of the government’s reasonable intrusion by law enforcement agencies?  What is it about an Apple device that makes it different, constitutionally different, than, for example, cloud-based data, a physical hard drive, or a cell phone made by anyone other than Apple?  The gloss, but also correct answer is nothing makes it different.  This stands opposite to the myopic Apple world viewpoint pressed by Chief Executive Officer, Timothy Cook, from Apple.

Apple knows that it can comply with the court’s order, but is using this battle as a platform to posture itself as a champion of personal security. This an interesting, but flawed stance, since the courts will ultimately win in the battle with Apple and there is no one who can reasonably believe that a cell phone’s memory is, like a paper diary, or a conversation with one’s lawyer, beyond compromise or the reach of a warrant based on a reasonable need for law enforcement to know what a mass murdered stored in their personal iPhone.